How Plastic Straws Took Over the World

How Plastic Straws Took Over the World

At the beginning of July 2018, Seattle became the largest U.S. city to ban plastic straws.

These groups are responding to public outcry demanding action against a product that, on one hand, seems very simple—but which is harming the world’s oceans, experts warn.

In just the U.S. alone, one estimate suggests 500 million straws are used every single day. One study published earlier this year estimated as many as 8.3 billion plastic straws pollute the world’s beaches.

Eight million tons of plastic flow into the ocean every year, and straws comprise just 0.025 percent of that.

But that hasn’t stopped the straw from becoming the major focus of recent environmental campaigns. This is in part because, for most able-bodied people, the straw is something you can easily do without. Eliminating plastic straw usage rarely requires a drastic change in behavior.

But if they’re so easy to do without, how did they become so ubiquitous in the first place? (Read more about efforts to reduce plastic straws.)

A Brief History of Drinking Tubes

While plastic straws are a recent invention, humans have been using hollow, cylindrical tubes to bring liquid to their lips for centuries. Ancient Sumerians, one of the first societies known to brew beer—5,000 years ago—submerged long, thin tubes made from precious metals into large jars to reach the liquid sitting below fermentation byproducts.

A man named Marvin Stone was the first to file a patent for a drinking straw, in 1888 . The Smithsonian Institute cites a widely touted legend saying Stone was drinking a mint julep on a hot summer day in 1880 when his piece of rye grass, then used as a straw, began to disintegrate. Stone, a paper cigarette holder manufacturer, decided he could make something better.

He wrapped strips of paper around a pencil, glued them together, and soon had an early prototype of paper drinking straws. He patented his design in 1888, and by 1890, his factory Stone Industrial (today a part of Precision Products Group) was mass producing them.

It wasn’t until the 1930s that straws gained the ability to bend. Watching his daughter struggle to easily reach her milkshake through a straight paper straw, inventor Joseph Friedman inserted a screw into the straw, wrapped floss around the screw’s grooves, and took out the screw. With indentations, the straw could easily bend without breaking. Friedman patented his invention and created the Flex-Straw Company to churn out his design.

Hospitals were among the first to embrace bendable straws, because they allowed patients to drink while lying in bed.

In the decades that followed, the popular paper straw found its way into sodas and milkshakes across America.

First invented in 1870 by an American named John Wesley Hyatt, the first plastic products were made from a material called celluloid that imitated animal products like ivory. Other plastic compounds took hold in the following decades: Bakelite was used for household items, nylon for stockings, and acrylic in military planes.

Both durable and cheap, plastic was being churned out of factories at unprecedented rates during the second world war. When the conflict ended, American manufacturers needed a new consumer market. In her book Plastic: A Toxic Love Story, science writer Susan Freinkel describes a wartime plastic production infrastructure suddenly devoid of wartime plastic to produce. Manufacturers turned their attention to a growing market for cheap consumer goods. No longer bogged down by wartime frugality, Americans wanted more and at lower costs.

“Thanks to plastics, newly flush Americans had a never-ending smorgasbord of affordable goods to choose from,” writes Freinkel.

Straws were among the many throw-away products being rapidly manufactured by large corporations. Plastic straws quickly became cheaper to produce and more durable than paper. They could easily wedge between the crosshairs of a fast food restaurant’s to-go lid without ripping or tearing.

Throughout the 1960s, the manufacturing infrastructure to mass produce plastic straws was put into place.

“It was better, it was cheaper, and they didn’t fall apart,” says David Rhodes, the global business director for paper straw manufacturer Aardvark Straws, a division of Precision Products Group. “It truly was a better product at a cheaper price, and in that era, no one looked at the future impact it would have on our environment.”

New takes on the plastic straw, like jumbo straws and crazy straws, were produced in the 1980s.

The world is now struggling to recover from its plastic pollution hangover.

Corporations, municipalities, and even national governments are proposing and implementing bans on plastic straws. Some companies have jumped into the fray by manufacturing metal and glass straws that environmentally conscious consumers can buy for personal use, though they lack the disposability of paper and plastic from which restaurants benefit.

The same businesses that once benefitted from public excitement over plastic are increasingly feeling public pressure to use alternatives.

Steve Russell is the vice president of plastics for the American Chemistry Council (ACC), a trade organization that represents plastics manufacturers, among other industries. He says regulation that focuses just on straws, or any one specific product, misses the point.

“The focus on individual products takes our focus away from more necessary discussions on how we bring waste management to places that need it the most desperately,” he says. “We think it would be better if straws weren’t automatically provided but available should a consumer need one.”

Russell says the ACC is focused on waste collection as the best way to prevent more plastic refuse from entering the ocean. 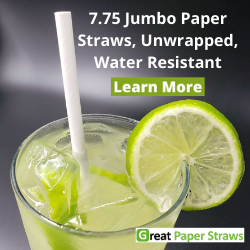 Environmental groups, however, say plastic straw bans are an important step toward their ultimate goal: ending the circulation of single-use plastic.

“It’s taking a stand on plastic pollution… and really taking a stand on what needs to happen, a ban on all single-use plastic products,” Greenpeace’s Kate Melges told Seattle news station KIRO 7 after the city’s straw ban went into effect on July 1.

Rhodes believes that plastic straws will one day be an anomaly. When Aardvark Straws was created in 2007, he says it was in part because of a demand from zoos, aquariums, and cruise ships that wanted to promote an eco-friendly image to their customers.

He thinks cost is the only thing standing between plastic straws and extinction.

“There’s no getting around that a paper straw will cost about a penny more than a plastic straw,” he says. For large corporations, that equals hundreds of millions of dollars, but the cost to the marine environment, you can’t put a price on that.”

This article appeared on National Geographic.

Learn more about our paper straws and how you can reduce single-use plastic waste.

About the Author: admin